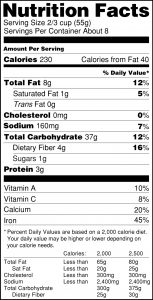 Calorie
A unit for measuring energy. The more calories a food has, the more energy-producing value it has. If you eat more calories than your body will use as fuel, the excess calories will be stored as fat. Certain foods contain various calories per gram:

Calorie Restriction
The reduction of calories that maintains adequate levels of proteins and essential fats while supplying adequate amounts of micronutrients (vitamins and minerals).

Carbohydrates
Various forms of sugar that, when converted into glucose, are the primary source fuel for the body. Simple carbohydrates are absorbed more quickly into the bloodstream than complex carbohydrates.

Cholesterol
Is a fatty, wax-like substance, necessary in small amounts for cell function, though harmful to the heart if too much is consumed or produced by the body.

Diabetes
A condition in which blood glucose (sugar) is not well controlled.

Eicosanoid
An autocrine hormone made by virtually every cell in the body. “Good” eicosanoids are anti-inflammatory, whereas “bad” eicosanoids cause inflammation.

Essential Fatty Acids (EFAs)
These are fats the body cannot make and therefore must be part of the diet. Essential fatty acids are building blocks of eicosanoids and other necessary compounds. Two groups of EFAs, omega-3s and omega-6s, engender eicosanoids.

Fat
Compounds composed of hydrogen, carbon, and oxygen atoms that serve as stored fuel for the body. There are different kinds of fats, some of which are healthier than others:

Free Radicals
Are highly reactive, imbalanced molecules that are the byproducts of normal metabolism and are associated with the degenerative aging process. Free radicals steal electrons from healthy cells to neutralize their own charge, causing cellular damage. Free radicals are also produced by exposure to cigarette smoke, smog and other environmental pollutants, harmful chemicals, toxins, and even sunlight. Antioxidant supplementation will help counter the effects of free radicals.

Glucagon
The hormone from the pancreas that causes the release of stored carbohydrate in the liver to restore blood glucose levels. Glucagon is a mobilization hormone.

Glucose
Is the simplest form of sugar and circulates in the bloodstream to be used by cells as fuel. Glucose is the primary fuel used by the brain and is stored in the liver and muscles as glycogen.

High-glycemic
A food is considered to be high-glycemic if it is broken down rapidly and enters the bloodstream quickly as glucose.

Insulin
The hormone that drives incoming nutrients into cells for storage. Excess insulin is the cause of weight gain and many degenerative illnesses.

Insulin Resistance
A condition in which cells no longer respond well to insulin. As a result, the body secretes more insulin into the bloodstream in an effort to reduce blood glucose levels.

Micronutrients
Vitamins and minerals that have no caloric value and little direct impact on hormonal response, but are a vital means of achieving optimal health.

Omega-6
An Essential Fatty Acid found in protein and most seed oils, Omega-6 can generate both “good” and “bad” eicosanoids.

Omega-9
An essential fatty acid that has neutral effects on hormone production, i.e. does not produce “good” or “bad” eicosanoids.

Vitamins
Various organic substances that are essential in minute quantities to the nutrition of most animals and plants. Though we produce some vitamins within our bodies, we need to obtain others via the foods we eat.