How do I perform a dead lift properly?

The short version: “Grip it and rip it”

The long, detailed version: Keep your shoulders in position, scapulas directly over (shoulders slightly in front of) the bar. This is a critical difference in the clean and the dead lift: the shoulders stay out over the bar longer in a clean to facilitate the second pull, but the dead lift begins the rotation back lower on the thigh. This may be the source of the misconception of the shoulder position. But the ride up from the floor to the lower thigh is the same in both. Even sumo dead lifts look the same off the floor, although it is harder to see the scapula position with the back in a more vertical position. 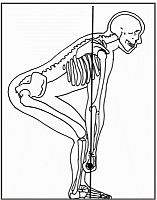 Another point is that if the dead lift is viewed from the side of the supine hand, the shoulder on that side is not as far forward due to the external rotation of the humerus, and the rest of the arm is further back because the elbow is pointed back instead of out.

Do I need to deweight between reps of a dead lift?

Yes. What you do as a physique athlete in future years is entirely up to you, but in order to properly learn and reinforce proper technique, you MUST begin all dead lifts from a dead lift position, bar on the floor, motionless.

Watch someone perform a set of 8 “touch-n-go” reps. Specifically, look at their body positioning at the beginning of the first rep, relative to the rest of the repetitions in the set. Notice how the first rep looks very dissimilar to the 2nd rep, as well as all subsequent reps? You only perform 1 proper rep this way, and 7 marginal reps. This is bad news because the motor skills learned during that 1 proper rep will get overwhelmed by the improper performance during the other 7 reps.

By deweighting, you also limit the amount of weight you can use, because the stretch reflex and the bouncing of the weights off the floor will not occur. This will save your lower back from potential injury.

The sumo dead lift, RDL and SLDL are fantastic assistance exercises for the hamstrings, glutes, but the conventional dead lift is the preferred variation for general strength building.

I am having problems with my grip during dead lifts, what should I do?

Straps can be useful, but the grip builds so fast there’s no reason for not developing it.

Should I use an alternating mixed grip or a double overhand or underhand grip during dead lifts?

To promote a stronger grip, perform as many of your sets as possible with a double overhand grip using chalk. Once you get to the heavier sets, you will probably need to use a mixed grip because you will not be able to pull effectively from the floor with a conventional grip. Never use a double underhand grip during dead lifts. This is asking for trouble, as well as a torn biceps tendon.

My traps are growing unevenly from using a mixed grip. What can I do to fix my trap development?

Before I address this, I’m going to state that I think this is, for the most part, a non-issue. However, I’ll entertain the several individuals who honestly think this is a problem worth addressing.

No. Use the 45s. Doing what amounts to “platform dead lifts” is not necessary nor desirable. Do the exercise with the standard size plate on either side of the bar. You can incorporate platform dead lifts, or dead lifts with smaller plates, later on once you have some additional time under the bar, supposing you are trying to be a powerlifter and need the additional training benefits.

Can I do trap bar dead lifts instead?

Trap bar dead lifts are an outstanding exercise to use as an assistance motion for the basic dead lift and the squat. They can sometimes be used by someone who can’t normally squat or dead lift due to some knee, shoulder or back problems. They are also great for farmer’s walks and shrugs.

However, the trap bar is not a lift used as a core strength and size building exercise. It is a great exercise for both strength and mass, but it’s an exercise best used by advanced lifters.

My hands hurt and I’m getting really bad callouses. Can I use gloves?

Those who are purely bodybuilders will probably end up gravitating toward this, but before you go this route, consider a few things

The reason you are getting callouses, aside from potential lack of chalk, is that you are holding the bar too high, up near the palm of your hand. The bar is going to pull downward until it gets into the “crotch” of your hand next to the knuckles. Chalk up and grip the bar down near the knuckle to start with, and you will save yourself a lot of pain and agony in the hands. With diligent chalk use, proper grip, and a little moisturizer in your hands when you wash, you can avoid the big nasty callouses and you won’t have to worry about creating a run in your pantyhose.

How close should the bar be to my shins while I perform the dead lift?

The bar should damn near scrape your shins all the way up and all the way down. In doing this, you will help ensure a few things

The initial pull involves a lot of leg drive, as well as what could be referred to as “shoulder drive”, where you use your hips to pull your shoulders back by performing hip extension. Wondering why your lats and traps get sore during dead lifts? It’s during this phase, where your traps and lats have to pull the bar back into your body, when the bar wants to try to pull you forward.

Your hips keep your torso from leaning forward (which is bad), and your traps and lats keep your shoulder girdle pulled back and in place, which, in turn, keeps the bar close to your body which, in turn, helps make life easier on your hips and lower back.

Here’s a good dead lift video using the conventional stance. I can’t see him from the side, but it looks as though his shoulders are slightly ahead of the bar, which is the optimal starting position. He keeps it close to his legs too, for max leverage and minimum back strain.